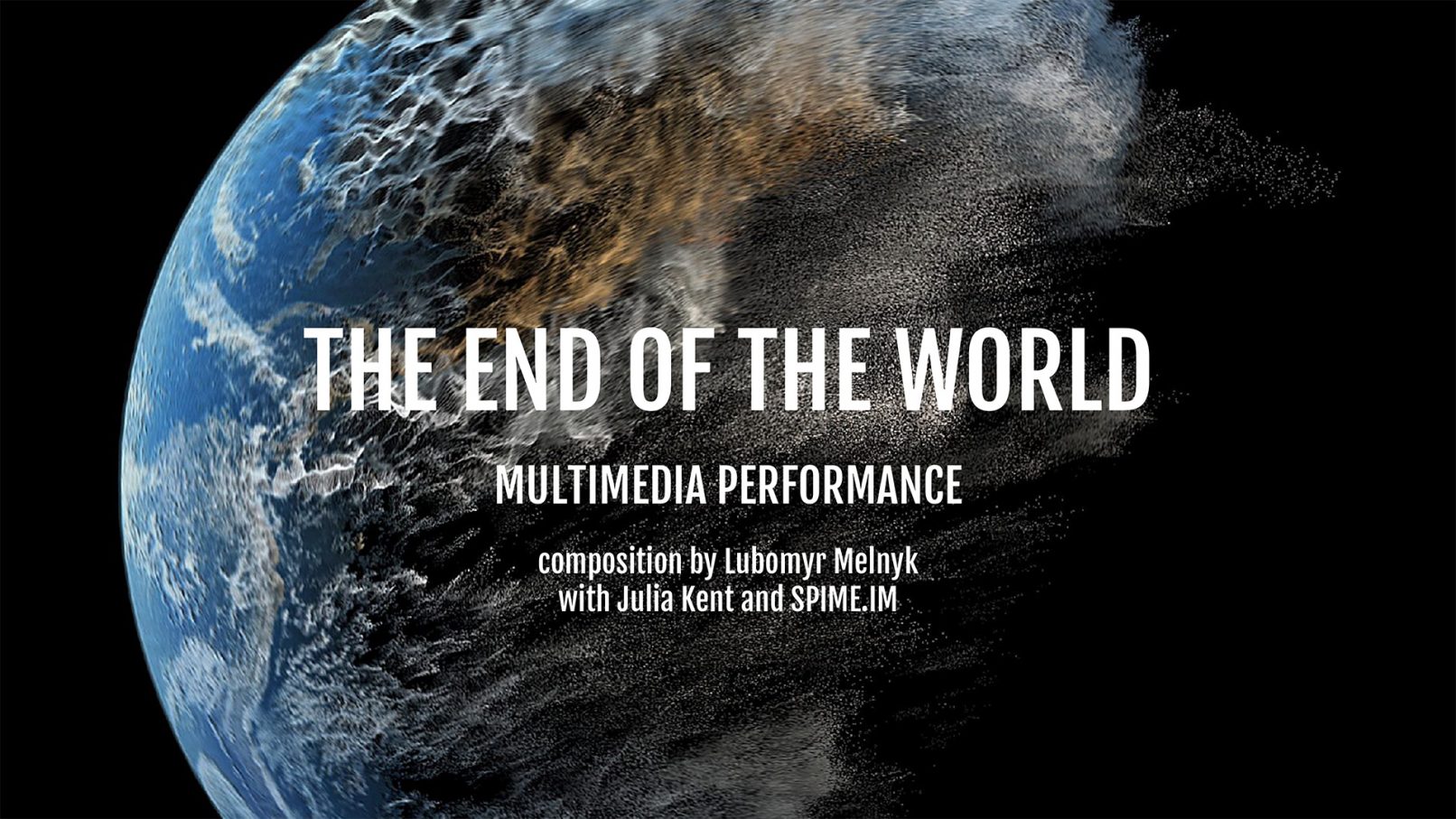 THE END OF THE WORLD

The End Of The World is the latest composition from the innovative pianist Lubomyr Melnyk, an opera who celebrates the beauty of the Nature and worries about the ecological disaster the planet Earth will be facing.

After long time of solitary compositions, Melnyk is collaborating with other artists  to melt the voice of his piano with both  electric and organics arrangements (Julia Kent)  and the digital timbers  from the emerging collective Spime.IM, to develop what was initially conceived as a solo piano suite into a monumental work where each section offer new acoustic vistas of  the main concept.

The End OF The World by Lubomyr Melnyk (an already composed 25’  piano piece) relates to  the  possible “final disaster of the World’s End where the temperatures of the oceans keep rising to the point that all human and most life in general dies out… and the world itself dies.  The music conveys the tragedy of this colossal event, and while the music itself contains such themes, the instrument of the piano is just not enough to carry this heavy topic as we need to reproduce all the sonic spectrum..”

To achieve the full dramatic impact this opera is conceived as an multimedia –  immersive experience with the digital  artists on stage playing with “wearable controllers” (a custom glove-synth developed by our partner Remidi) for audiovisual interaction with sound and images while the sonic spectrum and this rather short piano piece will be turned into something very much bigger and as a full length opera-concert with different and various sections  (around 75’).

Lubomyr Melnyk was born in Munich to Ukrainian parents in 1948. In 1972 and 1973 he lived in Paris, where he created his Continuous Music technique for piano: a combination of Classical and Minimalist piano styles. During his time in Paris he worked with choreographer Carolyn Carlson and developed an interest in dance. Melnyk is the fastest pianist in the world, and set two world records for his playing in 1985. He has composed more than 120 works, mostly for piano (solo, double or with ensemble), performed worldwide and given masterclasses on piano technique.

Melnyk has made many recordings. Avant-garde classical label Unseen Worlds reissued his debut album, KMH, in 2007, to critical acclaim. Further releases have followed on labels including Hinterzimmer (Windmills) and Erased Tapes (Corollaries, Evertina, Rivers and Streams and the latest Fallen Trees), as well as a collaboration with guitarist James Blackshaw titled The Watchers (Important Records). In 2016, Melnyk made his major-label debut with Illirion, released by Sony Classical.

Julia Kent is a Vancouver, Torino based cellist  and composer. She  has built a dedicated fan base over the course of five solo studio albums and extensive European and North American touring, after first coming to prominence with Rasputina and Antony and the Johnsons.
In demand as a musical collaborator and composer for film, theatre and dance, she has recently worked with Nadja, Markus Guentner, Western Skies Motel, Library Tapes, and Sophie Hutchings (for Gregory Euclide’s Thesis project). In the dance world she has collaborated with Ballett Mannheim in Germany, and Italian company Balletto Civile.

Spime.im is an artistic collective founded by Davide Tomat and Gabriele Ottino that aim to investigate, through transmedia projects, the aesthetics and the languages derived from the affirmation of digital reality. Spime.im use technology, 3D art and electronic music to weave immersive audio-video experiences, which explore the boundaries of identity, corporeity and perception, in a world where our virtual doppelgänger takes on an increasingly intense position, protagonist and all-encompassing.

They recently presented their “Exaland” performance at top level  international electronics/audiovisual  festival such as Club to Club (Torino) and LEV (Madrid).

This is an example of a Spime.Im live performance using ReMidi products (music is not a reference for this work): https://www.youtube.com/watch?v=kQhyPsATxlA